Worker unrest in August was again concentrated in China’s coastal factories as the country’s official purchasing-managers index dropped below 50 for the first time this year, indicating a contraction in manufacturing activity.

Of the 24 strikes and protests recorded on CLB’s strike map in August, more than two thirds (17) occurred in factories. Wage arrears continued to be the primary cause of these protests, followed by demands for pay increases and lay-off compensation. 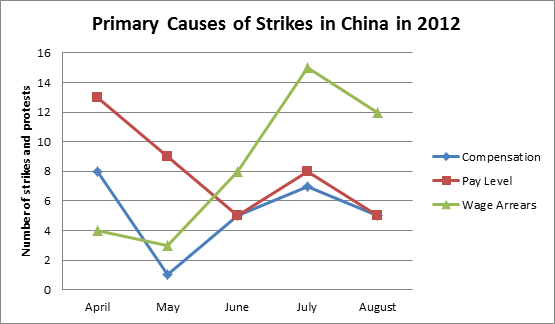 There were several examples of smaller factories in the Pearl and Yangtze River deltas either delaying the payment of wages or closing down entirely and the boss absconding. In all of these cases, workers took to the streets to vent their anger and demand their back pay. Several workers were briefly detained by the police during three such protests. In total, police responded to 12 of the 24 protests recorded last month.

There were five cases of workers in foreign and privately-owned enterprises demanding higher pay. For example, workers at a privately-owned electronics manufacturer in Nanjing complained that their pay was not commensurate with their work load. And in Wuhan, over 1,000 workers at a Sino-American automotive components joint venture staged a two-day work stoppage demanding an increase in their basic salary.

Corporate layoffs, restructuring and relocation plans also gave workers the chance to bargain with management for a better compensation package. In mid August, hundreds of Motorola employees in Nanjing and Beijing held banners in front of company office buildings demanding talks with the management, even though they had been offered a package that was already higher than legally required. At the end of August, protests in Nanjing continued as employees claimed they were less able to find new jobs than Motorola employees in other regions. They submitted a new compensation proposal for management to review and are expected to receive a reply this week.

CLB recorded five collective protests in the construction sector, all caused by wage arrears. The amount of wages owed varied from 1.5 million to 17 million yuan, and the disputes involved between ten to 70 workers. Workers organized sit-ins, marches, blockades and other collective actions to attract public attention rather than file written complaints with the local labour authorities.

One wage arrears case went viral on social media sites after 13 workers’ children aged five to 14-years-old were photographed holding placards demanding wage arrears from their parent’s employer, Guangsha Construction. One placard read “My name is XX, I want to drink milk. I want to eat cakes, pay back my parents’ hard-earned salary!” 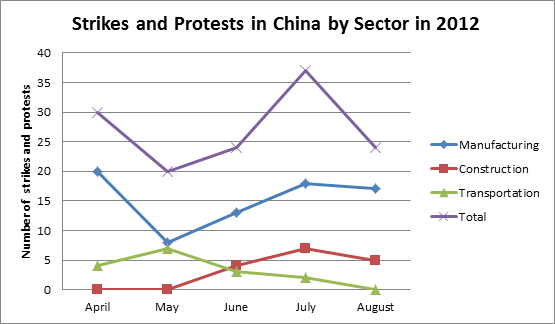 Local government officials intervened in eight of the August disputes and seven protests led to talks with management. Anecdotal evidence suggests that workers in joint ventures or foreign companies are more likely to win management concessions than domestically-owned factories. For example, one Motorola employee estimated that they had won at least 30,000 yuan per person more in compensation as a result of their protests.