Four years ago, Zhang Zhijuan, a 49-year-old street cleaner in the north-eastern city of Harbin suffered a stroke after working for nearly ten hours in freezing temperatures and heavy snow.

Zhang suffered long-lasting and debilitating injuries but because she did not die within the 48 hours specified in China’s Work-related Injury Insurance Regulations, the local authorities, who employed Zhang, refused to grant her work-related injury compensation.

As temperatures plummet across the whole of China, there is a growing risk that more street sweepers will suffer the same fate as Zhang and be badly injured or even killed in accidents related to poor weather.

On 17 January, for example, two sanitation workers in Inner Mongolia were killed in an explosion whilst trying to thaw out a frozen manhole cover. In the previous week, two street sweepers were killed by cars in separate incidents in Guiyang and Bazhong in Sichuan. The local media reported after the Bazhong incident that nearly 20 sanitation workers had been hit by vehicles in the district over the last two years.

Last year, CLB’s Work Accident Map, which records official media reports of accidents, logged 54 incidents in which sanitation workers were either killed or badly injured at work, a rate of one every week. The vast majority of these workers were hit by motor vehicles.

A high proportion of sanitation workers are elderly, making them more vulnerable to serious injury and, crucially, less likely to receive work-related injury compensation. Many local governments refuse to recognise that workers who are passed the statutory retirement age, 50 for women and 60 for men, are protected by labour law and regulations, claiming they are merely service providers and not formal employees. 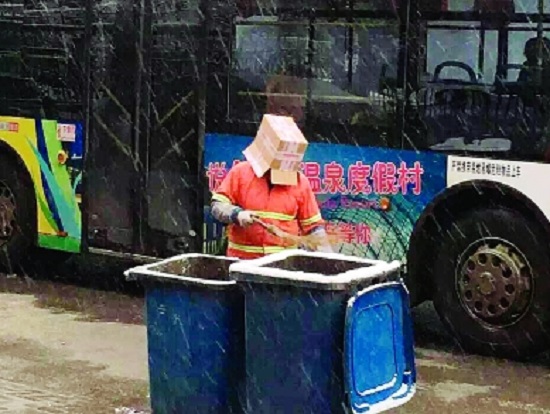 Zhu Shulan, a 58-year-old street sweeper in Wuhan uses a cardboard box to protect himself from the snow

The plight of elderly street sweepers often elicits public sympathy, as was the case of Zhu Shulan, a 58-year-old street sweeper in Wuhan, who was photographed yesterday using a cardboard box to shield his head from the heavy snow. However, very little has been done by local governments to improve the working conditions and safety of sanitation workers unless the workers themselves have taken collective action to demand change.