As China’s economy shifts to services in Q3, so too does labour unrest

Labour unrest in the service sector has for the first time surpassed unrest in manufacturing in the 3rd quarter of 2016. As China’s economy moves gradually away from export-oriented manufacturing, so have labour disputes and collective actions.

This week China’s official 3rd quarter GDP growth figures were reported at a rate of 6.7%, in line with expectations. The service sector is leading China’s future growth, and at the same time labor unrest in this sector has spiked to an all-time high of 123 strikes and protests during this time period, according to data collected by CLB’s Strike Map. 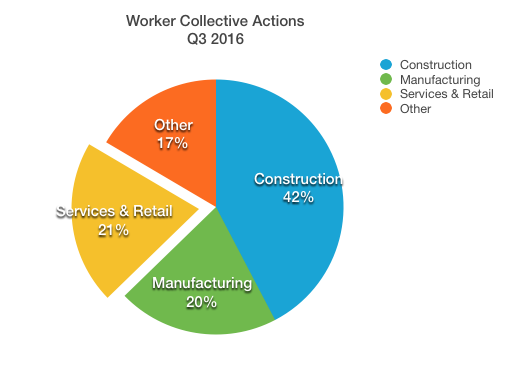 Strikes and protests by workers in services accounted for 21% of collective actions, surpassing unrest in manufacturing, and more than double the number from the same quarter last year. 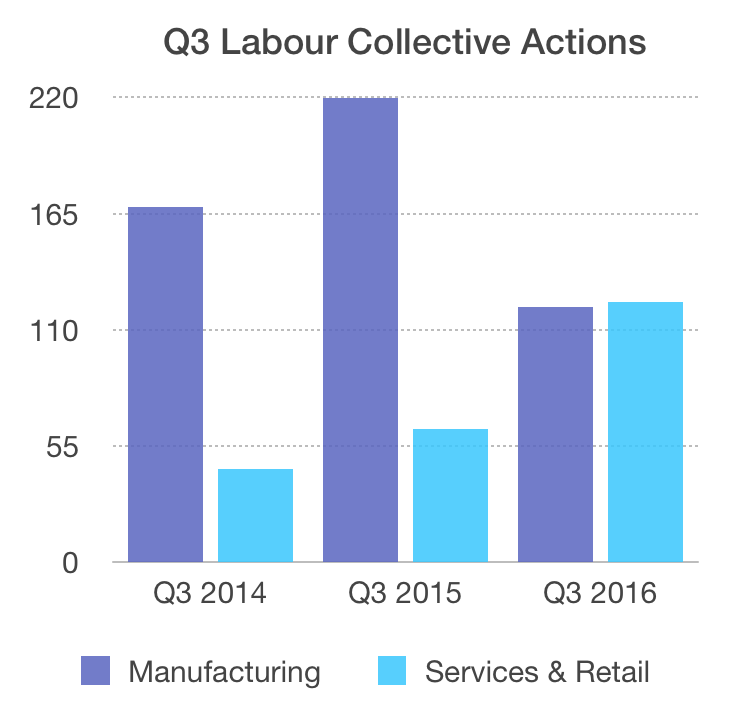 Meanwhile, as China’s property prices continued to climb, collective actions in the construction sector also reached an all-time quarterly high with over 250 worker actions, 40% of the total number and still the sector in which worker unrest is most prominent.

Incidents involving relocations and closures were also at their highest on record, due to companies closing their doors without compensating their workers, or disappearing to avoid paying months of wages in arrears. Nearly half of these were in the service and retail sectors, as spas, restaurants and shopping centres closed their doors leaving workers unpaid.

Despite the shifts in the sectoral distribution of unrest, the total number of labour protests remained on par with last year’s figures, but is set to rise significantly in the annual spike in the months leading up to the Lunar New Year.