Six years after the implementation of the Labour Contract Law, the vast majority of China’s 40 million construction workers still do not have a contract with their employer. A survey of 1,445 construction workers in five cities across China found that on average only 17.4 percent of workers had a written contract.

Moreover, the survey conducted by well-known labour scholar Pun Ngai in 2013 revealed that only a fraction of those construction workers who had signed a contract actually had a copy of it in their possession, and that there was often a significant gap between the pay and working conditions stated in the contract and the workers’ actual work and remuneration.

Of the five cities surveyed (Beijing, Chengdu, Wuhan, Shenyang and Zhengzhou), Beijing had the highest rate of contract signing, standing at 32 percent, but it also had by far the lowest proportion of workers with a copy of that contract. Beijing also had the largest discrepancy between the pay and conditions outlined in the contract and pay and conditions in reality.

The lack of an employment contract was the primary cause of the problems construction workers faced in getting payment of wage arrears and compensation for work-related injuries. Some 60 percent of the interviewees, for example, stated that their inability to prove a labour relationship was the main obstacle they encountered in getting the work-related injury compensation they were legally entitled to.

The vast majority of construction workers are hired by small labour service companies or individual labour contractors that are several layers of sub-contractors away from the main project contractor and the developer. The main contractor is thus usually isolated from any claims by the workers. That said, in December last year, a court in Shandong did rule that a worker who had died on a construction site did have a de facto employment relationship with the general contractor rather than the sub-contractor he was hired by because, the court said, the sub-contractor did not have the legal authority to hire employees.

The survey found that some 78 percent of the workers without a contract who suffered an injury at work had no option but to settle out of court, in most cases with the labour service company or labour contractor rather than the general contractor. The compensation received by injured workers in these cases was usually well below what they were legally entitled to. Three quarters of injured workers got less than 70 percent of their legal entitlement, and more than one third got less than 20 percent or even nothing at all.

Less than half of the construction workers surveyed had any kind of social insurance and, despite the high injury and accident rates on China’s construction sites, the survey found that just seven percent of workers had work-related injury insurance.

In addition, the survey revealed that wage levels for construction workers were much lower than often reported in the Chinese media. Some reports claimed that construction workers could earn 10,000 yuan per month, however the average daily rate for the interviewees was just 160 yuan, which translates to 4,800 yuan per month, working every day. The average daily rate varied from a low of 136 yuan in Zhengzhou to a high of 201 yuan per day in Shenyang. The survey found that salary growth in the construction industry had failed to keep pace with the increased cost of living in China and that most construction worker families were struggling to make ends meet.

Despite numerous attempts over the last two decades by the central and local governments to resolve the issue of wage arrears, the survey found that nationally only 20 percent of construction workers got paid on a regular monthly basis, while in Beijing the rate was as low as 5.5 percent.  The most common practice was for workers to be paid a portion of their salary for daily expenses and the remainder of the salary on completion of the project.

In many cases, however, workers who were owed wages only got a small proportion of what they were owed or were only paid the local minimum wage rather than the rate for skilled labour originally agreed. When workers are cheated out of their wages in this way, frustration can boil over into violent conflict. The report cited the example of a group of 80 carpenters from the central province of Henan who had been hired to work on a construction site in Beijing’s Haidian district. Halfway through the project, the labour service company that hired them suddenly replaced them with local workers. When officials from the local labour inspectorate arrived to mediate in the dispute they suggested that the workers be paid off at the local minimum wage rate of just 1,400 yuan per month even though the workers had already agreed the much higher rate of 250 yuan per day. This offer infuriated the workers and an altercation with the officials ensued. Several workers were detained by the police as a result and one was charged with the crime of interfering in the operation of public affairs (妨害公务罪). He was eventually released after six months in detention. Ultimately, the workers still only got paid at the minimum wage rate.

Protests and demonstrations by construction workers demanding the payment of wage arrears are still a daily occurrence across China and there is little evidence the problem will dissipate any time soon. On 1 March, for example, more than a hundred construction workers in Dongguan blocked traffic claiming several million yuan in back pay. See photo below. 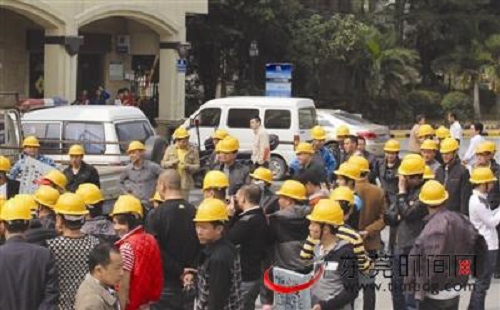