After the dream has faded: A former champion gymnast tells CLB about life after retirement

When Sun Xuguang’s mother saw an enrolment notice for the Jinan Sports School posted on the wall of the restaurant she worked at back in 1986, she had no hesitation in signing up her only son. She knew it would be good for him: if he enrolled in the Shandong provincial gymnastics team, he wouldn’t have to worry about making a living for at least the next 20 years.

She didn’t imagine at that time, that her son would become their home town’s first national gymnastics champion and collect ten gold medals during his glittering two-decade-long career.

But neither did she imagine that her son would end up jobless in his 30s, with back and ankle pain from years of intensive training. 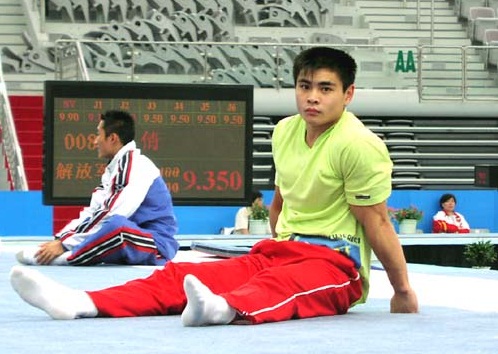 Photograph of Sun Xuguang at the China National Games in 2001, reprinted by kind permission.

“When I was six, my mother brought me to see the coach, and he was thrilled. He said I have big palms and the right physique to become an excellent gymnast. I thought I would live off gymnastics for my entire life.”

Sun was admired and envied by his peers when, aged six, he started to receive salary from the local sports training bureau of 56 yuan per month. But his income today in his early 30s is not at all enviable.

When he retired at the age of 26, Sun’s best hope was to become a coach with the team but he was told there was no place for him. He was offered a job in the team as a part-time coach but with a salary of just 1,150 yuan per month, compared with the 4,000 yuan earned by full-time coaches, Sun turned the offer down.

Some of his old team mates did become full-time coaches but as Sun said, they had the distinct advantage of a good family background. This was the one thing Sun said he “could not compete against.”

After Sun left the provincial gymnastics team that had been his home for the past two decades, he quickly realized that, apart from working as private coach in health clubs, his past glories counted for little in finding a decent job. Moreover, he found it difficult to fit into the real world again after being cosseted in a secluded training environment for so long.

Sun decided to go back to his hometown, where he was still recognized as a gold medalist. He worked at restaurants and local ports, and helped neighbours install surveillance cameras. More recently, he started running a small electronics store in his village but admits he is not really cut out for business. For now, he, his mother, his wife and his daughter have to live primarily off his mother’s monthly pension of about 1,000 yuan.

A huge gap in education

Most Chinese Olympians only have a middle school education at best, compared to many of their American competitors who hold or who are studying for university degrees. Education levels may not count for much in winning gold medals, but they can play a crucial role in finding a job when athletes retire.

When Sun quit formal schooling in the second year of primary school and entered the official sports school, he wasn’t too worried about having to give up his study of arts and sciences. He thought gymnastics would be a life-long career. It was only when he retired and couldn’t find a job that he understood just how much he had given up in pursuit of his dream.

Sun is not alone. Zhang Shangwu, the world champion in the 2001 World University Games was found begging at a Beijing subway station last summer. Zhang had joined the national gymnastics team at the age of 12, giving up his middle school studies.

The suspension of formal education at an early age means that many Chinese athletes lack the essential skills and qualifications to survive in an increasingly competitive social environment after they retire, usually in their 20s.

Out of the 50,000 professional athletes registered in China, around 3,000 retire each year, but only about one third of them receive a “proper job placement.” The jobless rate of retired athletes in China is estimated to be 40 percent, according to a survey quoted by the Wuhan Evening News.

Isolated by the system

Moreover, years of intensive training and living within the secluded state system often affects the mindset of elite athletes and increases their reliance and dependence on the state. Professional athletes enjoy the same privileges as state employees, and are provided with the best facilities and highest quality diet their provinces can find.

At the age of 13, Sun was promoted to the rank of “state cadre”, a level up from state employee, and was promised a higher salary and better pension benefits. However, the promised benefits never materialized and cadre title turned out to be useless.

The poor job prospects of those Chinese athletes who did not make it to the very top of international competition are in stark contrast with the country’s well-publicized Olympic champions. According to one survey, out of the 115 retired Olympic gold medalists, nearly a half of them have served as officials in one capacity or another. Many pursued careers in business, coached the national team, or even, like the former Sydney Olympic gymnast Liu Xuan, became pop stars. Only ten percent of Olympic champions are still between jobs.

“The intensity of training we received and the extent of the sacrifice we made at the time were no less than that of Olympic champions,” Sun said, but he added, the contrast in their life now was like heaven and hell.

However, Sun does not begrudge those lucky enough to reach the top. At this year’s Olympic Games, the Chinese male gymnastics team won the gold medal. One of the team members was from Sun’s old training school. Sun said he’s happy for him.

“I don’t hate gymnastics, I hate this system,” he said.