China Labour Bulletin supports and actively engages with the emergent workers’ movement in China. We recognise that in their continuing struggle for decent pay, decent work, dignity and rights, China’s workers need a trade union that can solely represent and defend their interests in collective bargaining with their employer.

We also recognise that China’s only legally-mandated trade union, the All-China Federation of Trade Unions (ACFTU), has so far failed to adequately support the workers’ movement. Our aim is to hold the ACFTU accountable to its members; to encourage and empower workers to meaningfully participate in the union and make it their own; and thereby to transform enterprise and local trade unions into genuinely democratic and worker-centred institutions.

While China itself will remain firmly at the core of CLB’s mission, in the coming years we will seek, in parallel, to build greater South-South solidarity between workers within China and those in other countries of the Global South affected by Chinese overseas investment and influence.

Our values are broadly social democratic, and we seek to promote those values in tandem with the development of the workers’ movement in China. This means support for workplace democracy, freedom of association and the effective recognition of the right to collective bargaining, equal pay for equal work, and the elimination of discrimination and harassment in the workplace. We support the development of a fairer, more inclusive society in which excessive income disparity is eliminated and every citizen has equal access to social welfare, education and healthcare. In line with the International Labour Organization (ILO) Declaration on Fundamental Principles and Rights at Work, we are also committed to promoting and realising the elimination of all forms of forced labour and child labour in China.

We recognize the fundamental values of tolerance, understanding and solidarity as prerequisites for cooperation with all our partners within China and internationally.

CLB is committed to managing its financial, material and human resources responsibly and in line with internationally accepted best practice. We aim to create and maintain a safe and productive work environment in which the full potential of staff and partners can be realised. In the course of our work, we endeavour to act in a cost-effective manner, with respect to individual rights and with due consideration to environmental sustainability and protection.

China Labour Bulletin is headquartered in Hong Kong and employs more than a dozen full-time staff from mainland China, Hong Kong and overseas. Our staff have decades of experience in labour relations in China, labour law, the practical implementation of collective bargaining, and the global trade union movement, as well as media and communications strategy inside China and internationally.

With well-established links with activists in mainland China, CLB is uniquely placed to facilitate and enhance international solidarity between workers in China and those the Global South, who share common experiences and face many of the same challenges in terms of rights protection and trade union organising. We have worked with trade unions and civil society organizations in India for several years and are expanding our network of partners across the Global South.

CLB’s dual-language website contains a comprehensive range of resources for policy makers, trade unionists, researchers, journalists and others who wish to know more about the workers’ movement and trade unionism in China:

CLB is widely acknowledged as the leading authority on the workers’ movement and labour relations in China and our expert opinion has been widely quoted in international media such as the New York Times, Wall Street Journal, Financial Times, and The Economist.

Some frequently asked questions about CLB

What is CLB’s legal status?

China Labour Bulletin is registered as a limited company in Hong Kong. It operates as a non-profit organization and does not retain any income that has not been spent on core costs and project work. CLB has a three-member board that provides oversight and guidance for our operations in Hong Kong and China.

In addition, CLB has a sister organization, Friends of China Labour Bulletin (FCLB), which is a U.S.-registered 501(c)(3) tax-exempt public charity, set up to facilitate fund-raising in the United States and provide an additional layer of oversight. FCLB has a nine-member international board of directors.

How is CLB funded?

CLB receives grants from a wide range of government or quasi-governmental bodies, trade unions and private foundations, all of which are based outside of China. Some grants are for specific projects, while others cover CLB’s operating costs.

How does the All-China Federation of Trade Unions fit into the picture?

The All-China Federation of Trade Unions (ACFTU) is China’s sole legally mandated trade union. It claims to be the “world’s largest trade union,” with around 314 million members and more than one million full-time officials. The structure of the ACFTU reflects the hierarchical administration of the Chinese Communist Party and regional government: ACFTU officials are essentially government bureaucrats with little understanding of the needs of workers or how to represent them in negotiations with management. At the enterprise-level, the vast majority of unions are controlled by management and represent the interests of management. Only very occasionally will an enterprise trade union actually support workers against management.

CLB has no working relationship with the ACFTU or any of its regional affiliates. However, as part of our trade union reform project, CLB staff regularly call local trade union officials to discuss specific incidents of worker protest, work accidents or workers’ calls for help in their districts.  All of these conversations are recorded and transcribed, and then analysed in individual case studies published on the Chinese website. In addition, we compile separate reports on unions in specific industries and regions. These reports show that while the ACFTU is certainly not a monolithic institution, there are deeply-ingrained, systemic problems that need to be addressed if it is to become a truly representative organisation. 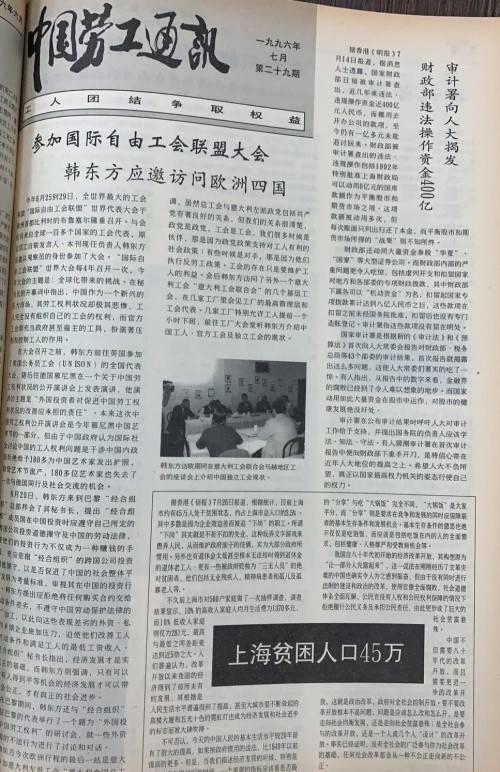 CLB was first established in Hong Kong in 1994 as a bi-lingual, monthly newsletter designed to inform international trade unionists of events inside China and to let Chinese workers know about domestic labour news and the role of trade unions. The Chinese version of the newsletter initially mimicked official newspapers such as the Workers Daily (工人月报) or Reference News (劳工参考消息) before being published under its own name China Labour Bulletin (中国劳工通讯). See photo left.

In 1998, CLB’s founder and executive director, Han Dongfang, started broadcasting on Radio Free Asia. His program, the Labour Bulletin (劳工通讯), gave Han the opportunity to talk directly to workers in mainland China and, for the first time, influence events on the ground rather than just reporting them.

The radio program also gave CLB the chance to work with lawyers in China who were willing to take on the cases of the aggrieved workers Han interviewed. The internet was just established in China in the early 2000s, and this allowed CLB to create a small but dedicated network of lawyers across the country, including well-known human rights lawyer Gao Zhisheng, who represented the workers at the Stella Shoe factories in Dongguan in 2004.

As our network of lawyers and activists grew, we were able to take on numerous ground-breaking cases of employment discrimination in the areas of health, gender, sexuality, etc. Encouragingly, it is now increasingly common for women in particular to come forward to file complaints about gender discrimination, although clearly much more needs to be done. We have assisted hundreds of workers with work-related injuries and illnesses, in particular those suffering from pneumoconiosis - China’s most prevalent occupational disease - in obtaining the compensation they are legally entitled to. For more details and a comprehensive overview of this issue, see CLB’s research report, Time to Pay the Bill: China’s obligation to the victims of pneumoconiosis. In addition, we have helped hundreds of worker activists, such as Walmart veteran Wang Shishu, who had been fired by their employer because of their activism, to either win reinstatement or obtain proper compensation for unfair dismissal. In total, we have published around 80 representative case summaries in our Labour Rights Litigation section.

By 2005, CLB realised that although taking on individual legal cases could make a difference, there were simply too many instances of labour rights violations in China for any one organization to handle. CLB took the tactical decision to focus, in addition, on developing the collective bargaining capacity of China’s workers as a means of resolving labour disputes before they escalate into conflict. Although the received wisdom at the time was that collective bargaining cannot exist without freedom of association, CLB took the view that this approach was simply not a practical option in China given the monopoly of the ACFTU.

Initial success in collective bargaining was limited, due to worker apathy and a lack of knowledge about unions and the negotiation process. It was not until 2011, when several hundred workers at the Citizen Watch factory in Shenzhen went on strike and demanded collective bargaining with management, that the program really began to gain traction. Many of our best known collective bargaining cases, such as the Guangzhou sanitation workers’ contract dispute of 2014 and the Lide shoe factory workers campaign for compensation the following year, have been documented in detail on our website. In total, CLB has assisted in over 100 similar cases where workers, with the help of civil society labour activists in our network, have organised collectively and forced the boss to the bargaining table. We used this practical experience to compile a Code of Collective Bargaining for workers and management and conducted numerous collective bargaining trainings for workers across China.

The first half of the 2010s was a period of rapid expansion for CLB in which we took on new staff, forged new partnerships with civil society labour organizations in mainland China, and broadened our reach both within China and internationally, through new social media initiatives.

However, the Chinese government’s crackdown on civil society organizations that began in 2014 and escalated in 2015 has made the operating environment in mainland China far more challenging. In response, we have begun to concentrate more resources in our Hong Kong headquarters and develop a more integrated approach that can provide the support our partners on the ground in China need, as well as widen and diversify our social media presence and influence in China.

We have increased our staff in Hong Kong and substantially expanded our bi-lingual website and interactive map coverage. In addition to reporting on developments in the workers movement, we now focus in particular on the role of trade unions in China, and how China’s growing international presence impacts on workers around the world, particularly those in the Global South.